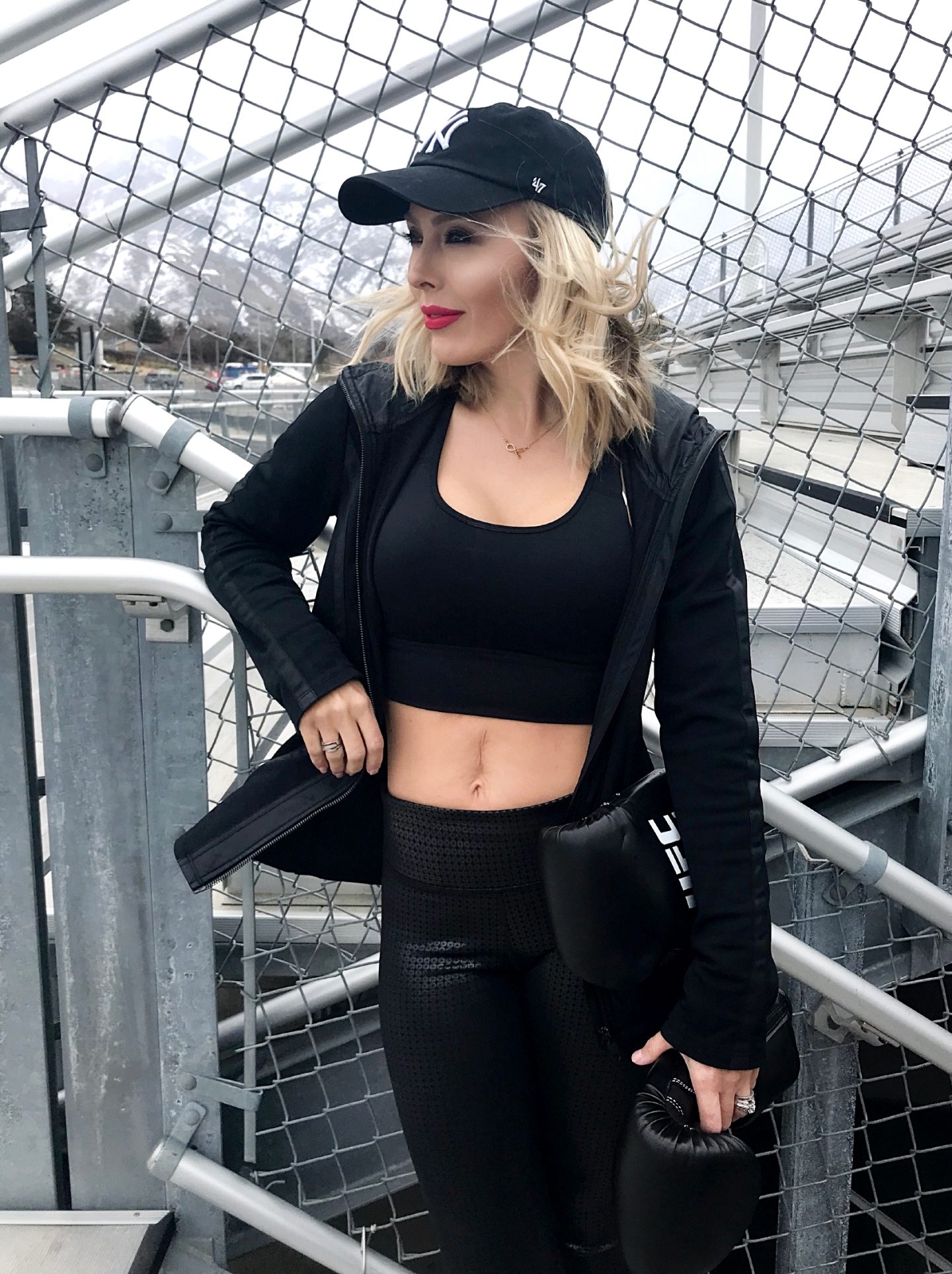 The cursor keeps blinking, waiting for me to type a letter. It brings me back to November 2013 when my life flashed before my eyes and changed forever. Here is my cancer story:

It all began on August 20, 2013. I went in for an appointment with a random family practice doctor for my annual physical. I told the doctor I felt great, exercise regularly, and eat pretty healthy. The appointment ended and I walked down the hall to have my blood drawn. A few days later, I called the office for my results and was surprised to see that a few of my liver tests had elevated results. The doctor was concerned, but told me to come back in two months for another blood test.

Life went on as normal. My husband and I went to Mexico on a fun vacation, my daughter started preschool, my son was growing everyday (he was 6 months at the time), and everything seemed fine.

Fast forward to November 5th. I went into the doctors office and had more blood drawn. This time, I was a little nervous to get the results. Was something really wrong? A few days later the doctor called and some levels were still high. The doctor told me he ruled out hepatitis A, B, and C and that my iron levels were fine. The next step was to go in for an ultrasound to see if there was anything going on with my liver.

On Monday, November 11th, my mother-in-law came over to watch the kids while I went to the imaging center for my ultrasound. My husband had left the day before on a business trip and was going to be out of town all week. I wasn’t expecting anything to result from this appointment so I wasn’t very nervous. The ultrasound technician began the ultrasound and everything appeared to be normal. That is, until she wandered over to my left side. She discovered a large cystic area measuring 10×15 centimeters near my left kidney, but wouldn’t tell me anything else. I was annoyed, but knew she couldn’t jump to conclusions since she wasn’t my doctor. Shortly after, I left the office and anxiously awaited a call from my doctor with the official results.

This was the beginning of the worst week of my life.

Two days later, on November 13th, my family practice doctor called and gave me the official results from my ultrasound. I listened intently as he gave me the news. I had an enormous “cyst” on my left kidney. He said the walls were thickened and it wasn’t a pure cyst. His exact words were “we need to chase this down”. I started crying. I called my husband, who was still out of town and reiterated the information as best as I could. I felt sad and alone. Of course, I immediately started researching online and tried to find out any information I could regarding cysts of that size. That’s when things got a lot worse. According to many articles I read online, 90% of cysts larger than seven centimeters were cancerous.

The next morning (Thursday, November 14th), my mother-in-law came over to watch the kids again while I went back to the imaging center for my CT scan. I sat in the waiting room alone and couldn’t stop myself from wondering what was going to happen. My thoughts went in so many different directions. I was finally able to get some rest that night, but awoke to an abrupt phone call from my doctor the next morning. He told me that he was able to get me in to see a urologist that morning and I needed to be there in 45 minutes. I knew this was going to be bad. I wasn’t expecting to have an appointment for a week, maybe two. The fact that they got me in so fast, was a terrible sign.

Alone again the next day, I sat in the urologist office, waiting over an hour for him to come into my room. It took forever! At that time, my husband was driving home from his business trip, but wouldn’t be back for a couple more hours. Finally, the doctor came in. We called my husband and put him on speakerphone so he could hear us talk. It’s a blur to me now, but in essence, he told us it was most likely cancer and that it needed to be removed immediately. I cried during the entire appointment. The phlebotomist drew more blood and then I walked to my car. I opened the door, sat down and cried the hardest I have ever cried in my entire life. I knew I had kidney cancer.

Had it spread? Would I be here to see my children grow up? Was I going to die? Terrible thoughts flooded my mind. I drove home barely being able to see the road through my tears. Thankfully, my husband made it home about 30 minutes later. I hated having to endure the worst week of my life with him out of town.

The next few days I was a mess. Monday morning, I went to the imaging center for my CT scan and MRI. Thankfully, the cancer didn’t appear to have spread. Now we had the rest of the week to prepare for my surgery, which was scheduled for Friday (November 22nd).

On Friday, we drove back to the hospital for surgery. When they were preparing me for the IV’s, I remember listening to all of the voices around us. I could tell they were all old people. I kept thinking, how can I possibly be here? I’m so young! Moments later I said my goodbyes to Erik and prayed for the best. They wheeled me back into the operating room and as I entered, I thought “this looks exactly like on TV”. Equipment everywhere and nurses standing there waiting for me to arrive. I remember seeing a male nurse sitting there as I entered the room (more on that later). One of the nurses asked me to move onto the operating table (which was ridiculously small). As I moved, I said to him, “you guys must see some pretty gross stuff in here”. And then I was out.

Many hours later, I woke up to a blurry image of my husband standing near me in the recovery room. The doctor said everything went as well as could be expected. To our surprise, he said the tumor was the size of a cantaloupe and that it had enough fluid inside to fill a Big Gulp. It had completely taken over my torso. Because of this, my other organs were pushed out of their normal position. We were shocked. How could that have been inside me and we had no idea? 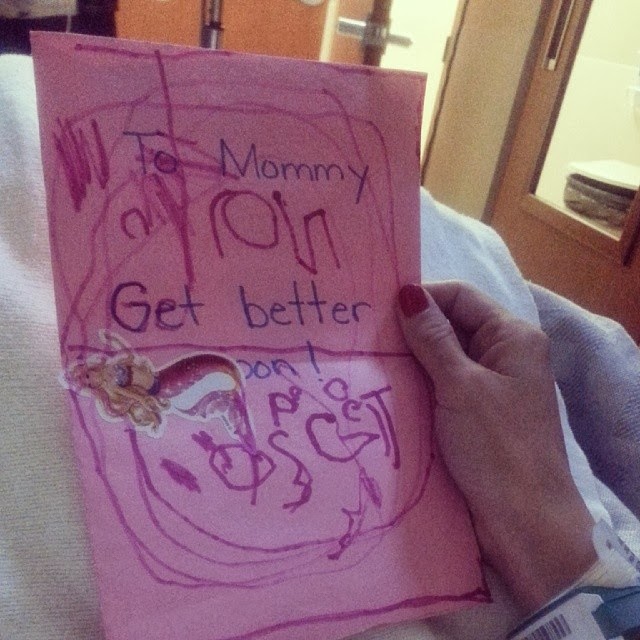 I couldn’t feel much pain at that time, because I was on so many medications, but I could barely speak. It hurt just to whisper, which was something I didn’t expect. Recovery was rough that day. I couldn’t move and all I wanted to do was sleep.

The next morning, I was feeling a little better. I was able to walk about 10 yards down the hall, which was a huge improvement. My sister brought Claire and Ethan to visit later that morning and I was so excited to see them. Even better than seeing them, was seeing my parents for the first time in 18 months. They were scheduled to come home from their church mission in Norway the next week, but left seven days early to be with me in the hospital. I was overjoyed to have my parents finally by my side.

I remained in the hospital until Sunday (November 24th). My doctor said I could stay as long as I wanted, but I was feeling a little better and knew it would be easier on everyone if I went home. The drive home was miserable. Erik drove slow and cautiously, but every little bump was extremely painful. That week, I was a bump on a log. I literally laid on the couch all day and couldn’t move. Every time I would sit up or lay down, I could feel and hear all of my insides slosh around. It was such an uncomfortable feeling. I also wasn’t allowed to pick up Ethan for six weeks, which was a huge challenge. 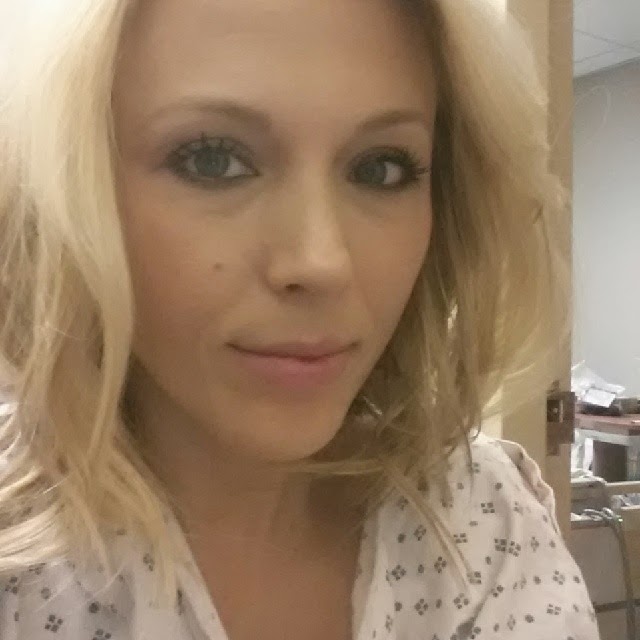 On Saturday, November 30th (8 days after surgery), we finally received a call from my doctor with the official pathology results. I had kidney cancer (clear cell renal cell carcinoma). It was unreal. Knowing that it was truly cancer and not just a tumor was devastating. I thought I was out of the woods after surgery, but now the emotional turmoil continued. Even though I was out of commission for about six weeks, the emotional part has been far more difficult than the physical. Not a day goes by that I don’t think about what my future might bring. Will it come back? Will I die young because of it? Do I have a disease that predisposes me to this and other cancers? It’s been really hard and even though I try not to worry about the unknown, it’s scary.

Later that month, we received a call from my doctor’s assistant. She told me that my doctor had spoken to his colleagues about my case and they suggested I do genetic testing. I was so young and had no family history, which made my case very rare. In fact, I was the youngest patient to have renal cell carcinoma that he’d operated on. That was not a record I wanted to break.

Every six months since my surgery and for the next 5 years, I went to various doctor appointments, had x-rays, CT scans, and blood tests to make sure I was healthy. It never got easier for me emotionally and I always wondered if that would be the day they told me it was back. Thankfully, they never did. Last week, I had my final tests and meeting with my doctor. He told me:

“You are CANCER FREE! You are a survivor! You probably only had two years left.”

I will never forget that. He also told me that my right kidney has now grown into a “super kidney” and appears to be doing well on its own. Thank heavens!

My life will never be the same after this experience. Kidney cancer will forever be on my mind. I will always be grateful for the outcome I had at this time, but will continue to be scared of what the future might bring. My stomach may look like I’ve been in a bear fight (I have a large scar down the center of my stomach and four small scars throughout the sides), but in a strange way, it reminds me of how precious life is. Seize the moment. Tell your family you love them. Be patient with your children. And maybe most importantly, get a yearly physical.

It may save your life!

Fashion, beauty, and lifestyle blogger currently living with my husband and 2.5 kids in Utah. Always striving to be classic, simple, and chic.